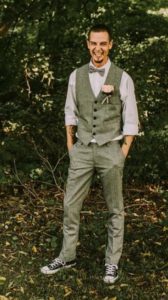 Born and raised in Greenfield, just east of Indianapolis, Gabriel has always been drawn to the arts. One of his earliest memories, he recalls saying “I want to be an Artist when I grow up!” Now tattooing since 2011, he is living that childhood dream of being an artist, and tattooing for a living. If he’s not at the shop, he is spending time with his wife and 3 children.

Gabriel started his tattooing career after suffering a Traumatic Brain Injury while serving in the Army in North Carolina. He found art to be the best thing for him during his recovery and rehabilitation. His best friend was his tattoo artist, Jay Moren, and Jay agreed to take him under his wing and mentor him into the tattoo industry. He spent the next year living with Jay and apprenticing at his shop in the evening and weekends until he got out of the Army in 2011 and moved back home to Indiana to continue pursuing a tattooing career. He opened his own private studio in Greenfield, that operated on an appointment only basis. He also held down another full time job to make ends meet, as the tattooing industry in Greenfield was scarce. He would tattoo at night until the early morning, honing his skills, until August 2018, when Josh Pierson offered up a chance to come tattoo at Untitled Ink in Broadripple. He jumped at the opportunity and is now tattooing full time here at Untitled Ink, and living his dream every day!

Gabriel’s foundation was built by a realism/color portrait specialist, Jay Moren, which he believes makes him ready for anything.

He has no limitations as far as styles and techniques go, and doesn’t like to tie himself down to one or two. He is confident in his abilities and is not scared to try new things. He is up for tattooing anything, but if you give him a blank canvas, 9 times out of 10 it’s going to end up being scary or horror related. Horror art is definitely his favorite genre, and believes it’s the most fun to design and tattoo. Just ask him to do something scary and he’ll be as excited as a kid in a candy store! He also really enjoys tattooing realism, or “realitional” (a realism/ traditional hybrid) using bright complimentary colors that bounce off of each other and pop off the skin. Black and Grey has worked its way into his heart as well, and he is always excited for new Black and Grey projects.